Important milestone: The installation of wind turbines in Westermeerwind has started

The installation of 48 Siemens wind turbines for nearshore Windpark Westermeerwind in the IJsselmeer has started. The first tower was placed today on the foundation that had already been completed in May

The towers are brought directly to the construction site, from the port of Amsterdam through the IJsselmeer along the dike of the North East Polder. Each shipment carries, among others, two upright tower parts of no less than 50 and 40 meters high, comparable to apartment buildings of 16 and 13 floor respectively.

Impressive lifting work of towers and gondolas
The lower part of the tower is placed with a crane onto the foundation above the water by Van Oord/Mammoet. Then the crane places the second part of the tower on top of this. Over the next few weeks this will be done a total of 48 times. The installation of the gondolas will start at the beginning of September; these will be installed onto the towers and are also delivered straight from Amsterdam.

Transportation over the IJsselmeer of 100 meter wide rotors
The installation of the rotors takes place last. The blades are brought by ship to Oude Zeug (close by Medemblik), where they are pre-mounted to complete rotors. Subsequently, the rotors, which are placed horizontally on a ship and have a diameter of more than 100 meters, cross the IJsselmeer. At the building location the floating cranes lift the complete rotor off the ship, after which the rotor is mounted onto the gondola in one piece. 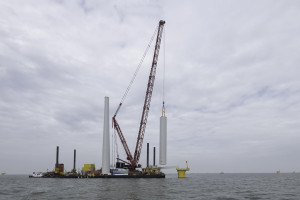 The installation of wind turbines in Westermeerwind has started

A press photo is added to this press release, which should be used with the indication @Westermeerwind.

Windpark Westermeerwind is being built in the water of the IJsselmeer along the dikes of the North East Polder. It is the largest near shore wind farm of our country and consists of 48 wind turbines of 3 MW each – on two rows along the Westermeer dike and Noordermeer dike – and a transformer station on land. It is expected to generate wind energy for 160,000 households.

Westermeerwind is part of Windpark Noordoostpolder with 86 windmills in the water and on land, along the dikes of the IJsselmeer. See: www.windparknoordoostpolder.nl

Westermeerwind has contracted out the supervision and management of Windpark Westermeerwind to Ventolines from Emmeloord. Siemens is the main contractor of Windpark Westermeerwind and will maintain the wind farm for a period of at least fifteen years. Various Dutch companies cooperate with the project as subcontractors, including Van Oord and Mammoet for the foundations and the installation of wind turbines, and VBMS (VolkerWessels Boskalis Marine Solutions) for the cabling to the transformer station.